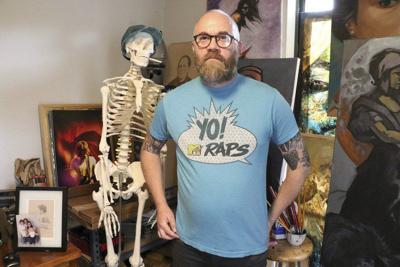 Doug Hill / For The Transcript

Oklahoma red dirt musician John Calvin Abney shared his new LP with Norman artist J. Chris Johnson long before its official September 27 release. The pair are friends and both are rooted in the music and arts scenes here. Abney has resided here at times during his career that’s involved intensive touring for over a decade. Johnson is raising a family in Norman and paints in a northwest side studio. His spouse Marissa is a noted Norman music scene photographer. When Johnson heard Abney’s latest disc “Safe Passage” (Black Mesa Records) it struck a chord.

“It started out as just a discussion between me and John,” Johnson said. “I was wanting to switch styles again and had this idea that I wanted to paint concept art for an album that didn’t exist.”

Johnson was working on a painting from a photograph that Abney had provided. It was a picture Abney’s grandfather had taken when he and a brother were children.

“It sprung from that and I was telling him about this concept art idea. Then the thought was, why don’t we just do paintings from your album,” Johnson said. “He sent me a link to (album) ‘Safe Passage’. I listened to it and would paint what I felt. It was cool because it’s a very visual album. Listening to it makes you feel like you’re on a road trip.”

“Safe Passage” is ten tracks that Abney describes with his typical joyful outlook on life.

“These are the most hopeful songs I’ve written yet, and I hope they bring a kind of comfort to anyone moving down their path towards truth and happiness and safety for themselves and those they hold dear,” Abney said.

The musician’s reputation in Norman is one of an admirable fellow who is a treat to collaborate with. Song titles include, “I Just Want to Feel Good,” “Kind Days” and “Soft Rain After All.” Johnson did a painting for each of the ten original compositions.

“John is honest,” Johnson said. “It’s not commercial and he’s not doing the lowest common denominator lyrics. When John writes something, it’s from him. And he’s a brilliant musician. ‘Safe Passage’ is his masterpiece album. I told him I compare it to the Beach Boys’ ‘Pet Sounds.’”

“It was probably eight years ago that I first heard John at the Blue Bonnet,” he said. “That’s where I met him. I like how my musician friends are trying to paint a picture with sound to give you a mental image. So we’re kind of in tune in that same way.”

The artist and musician are considering making a limited edition book with the album illustrations on one page and song lyrics on the next. Abney and Johnson have had an ongoing dialogue about their synergy along with various comments people make about it on social media.

“John wanted me to do my thing,” Johnson said. “He didn’t want to tell me to paint this or this or this. He wanted to see what my interpretations were. I don’t do projects I’m not interested in. This was challenging. Plus it helps him promote the album. I didn’t want it to seem like I was riding on his coattails. We did this project together because we wanted to.”

Johnson was inspired by the moods of the songs rather than a straight forward reading of the lyrics.

The painting for “Kind Feeling” depicts a fiery red sunset over a lake seen through a passenger side automobile window. Johnson likened it to a Polaroid snapshot from life. He struggled with some of the imagery.

“For song ‘Days of Disconnect’ I did three or four different paintings but it ended up being like an old treehouse,” Johnson said. “Those are the kinds of things that catch your eye on a road trip.”